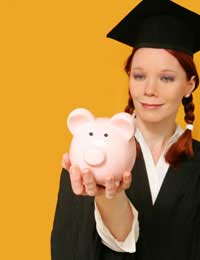 It used to be that you would come out of university armed with your degree, some life experience and perhaps a few interesting stories to tell. However, since 1998 and the introduction of student loans, many students have found that they are finishing their education and starting their working lives with a considerable sum of debt.

The good news is that a student loan probably has one of the best interest rates that you'll ever be offered, if you choose and are able to take out the loan. The Student Loans Company is virtually endorsed by the Government as the best financial aid and way to borrow money during your time at university. The amount you can borrow is means tested by your Local Education Authority (LEA) against how much your parents earn, your age (over 25s have different entitlements) and your situation (i.e. whether you live at home, overseas etc.).

The Student Loans Company sets the interest rate -the cost of borrowing the money - at a relatively low rate compared to other commercial borrower's offerings. You are basically given two payments, one of which is to help cover the cost of living, with the other helping to pay for your tuition fees (England and Wales only).

At present, the interest rate is set at 4.8%, which is supposed to fall in line with the rate of inflation. This means that effectively you are not really paying any sort of interest at all. So there's no real need to take out extra loans to help consolidate your student loans - you're unlikely to get a better deal.

The other good news is that you don't need to start repaying the loan until you're earning over £15,000 a year. The April after you start earning this amount will see you paying 9% above your salary, taken out of your earnings in the same way as your tax and national insurance.

However, this is where the 'hidden fees' part comes into play. Although technically not a hidden fee, you should still be aware of the fact that the longer that you're not earning above £15,000, the longer you'll be accruing interest on your loan after you've left university.

The interest rate keeps being added on every month until you are able to pay. If you reach the age of 60 and are still not earning £15,000, then your student loan will not need to be repaid. However, bear in mind that the average salary in the UK is around £22,000 - with the average starting wage for graduates at between £22,000 and £24,000. It seems an unlikely prospect that many student loan borrowers will never repay their loans.

If you decide to leave your university course half way through the semester, you should be aware that you'll still be liable to pay your fees until the end of the year. This means that although some of the loan money may still be available to you, you'll still be accruing interest on it. The money will also have to be repaid regardless of whether you leave weeks before the end of the year, or in the middle of your first semester. So in reality, you won't really have any extra money!

Getting Help from the Financial Ombudsman